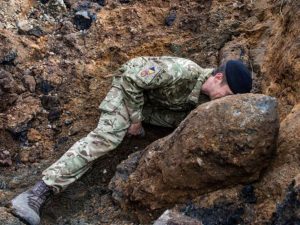 A major risk on development projects is Unexploded Ordnance present within the ground (UXO – bombs and other incendiary devices).  These may originate from:

The potential for ordnance being present within the ground depends on a number of factors such as site history, proximity of war-time strategic targets, and the number of bombs dropped in the area, but also on the nature of development at that time, and also geological conditions.  The accuracy of aerial deployed bombs during the wars was poor, and many have been identified in areas some distance from the probable original target.

It is estimated that around 10% of all munitions dropped in World War Two failed to function as planned.

If they did not detonate on impact, depending on the ground conditions they could penetrate the ground by some distance (in excess of 10m below ground level in certain conditions) forming a ‘J’ penetration shape from its momentum and the resistance the soils within the ground.  Therefore, it may end up some distance laterally from the original point of entry.  Even if sites have been developed since the war, such buried ordnance may remain in the ground and could still pose a risk, for example this recent bomb found at Tata Steel in Port Talbot during excavation work.

In South Wales, the former docklands and heavy industrial areas around Cardiff, Newport and Swansea were major targets for the Luftwaffe – the Swansea Blitz of February 1941 and bombing of Cardiff throughout the war.  Given this, the cities of Swansea and Cardiff are both listed as potentially high risk from UXO, i.e. there is the potential for encountering UXO on any development site within Swansea and Cardiff. The oil refinery blaze of World War 2 created a legacy of pollution problems in Pembrokeshire.

UXO are generally stable left buried and undisturbed.  However, they can become unstable through impact or vibration, for example during Site Investigation or development.

We consider the risk from UXO on every investigation site, in accordance with CIRIA C681, always undertaking a review of UXO risk maps and where a potential risk is identified, the first step is often to procure a specialist desk study based Phase One UXO risk assessment.

This considers the local risks in greater detail than the regional risk maps and, in our experience, often suggests low risk, with no risk mitigation measures required.  However, where a potential risk is identified, a Phase Two Detailed Risk Assessment is recommended, whereby further, more detailed records (including confidential military records) are reviewed.

Risks from UXO during development are commonly greater than during investigation due to the increased number and depth penetrations, e.g. piles at close spacing. Early identification and appropriate UXO risk management benefits all projects in the longer term.