In September 2021, after a period of consultation and revision, Natural Resources Wales (NRW) published the updated Technical Advice Note (TAN) 15, which will replace the existing TAN15 (2004) and TAN14 (1998), coming into effect from 1st December 2021. 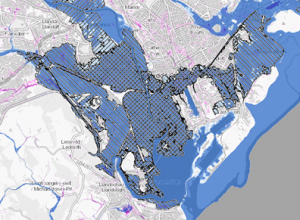 The driver for the update to TAN15 flooding guidance is led by climate change, which is creating more severe and frequent flood events in Wales. The planning application and approvals process needs to acknowledge this risk and the risk to developments not only at the time of application but over the lifetime of the development, which may be impacted by climate change for a number of years.  Historically the “Development Advice Maps” published by Natural Resources Wales (NRW) focus only where flooding is a risk now and has been historically recorded.

The new ‘Flood Map For Planning’ will focus on existing and future flooding risks.

The new mapping which will replace all other maps from the 1st December also introduces new categories of areas at risk which will comprise:

How will the new guidance be applied?

The changes are to be formally adopted from the 1st December 2021, with the intervening period to be used to process existing applications and move to the new guidance. Prospective developers are advised, that due to the time applications can take to be determined, any submissions after the 1st November 2021 should utilise the new TAN15 (2021).  Also taking affect from the 1st December is that the Local Planning Authorities (LPAs) minded to approve any new highly vulnerable development in a Zone 3, will need to provide notification to Welsh Ministers, however, changes of use and conversion in a Zone 3 will not need to be notified.

Local Development Plans that are to be updated soon will need to reflect the changes, however, those recently reviewed will not need to be reassessed unless the LPA consider the changes indicate that requirement. The new TAN15 flooding document, should be referred to for full content and context.

The consequences of flooding can be severe and present significant risks to people and property. In recent years, despite the advance warning of weather forecasts, large flood events have happened without warning, have increased in severity and are increasing in frequency. Those unlucky enough to have suffered repeatedly to flooding during 2020 – 2021 will testify to the added frequency and destruction of flooding.

NRW estimate that some 160,000 properties (NRW – TAN15 2021) face a 1 in 100 chance event of flooding from seas, rivers, and surface water, exacerbated in coastal areas due to the loss of coastline through erosion.

This new guidance has been produced to address the risks posed to existing and new developments, consider the potential implications of climate change and ultimately ensure that a proposed development is suitable, safe and remain safe for its lifetime.

How can the new guidance be applied?

The consequences of flooding can be severe and present significant risks to people and property. In recent years, despite advance warning, large flood events have occurred with increased severity and significantly increases in financial loss. Whilst Wales has so far evaded a catastrophic loss of life due to fluvial/tidal flooding, it is widely acknowledged that without considered and implemented changes, a loss of life event, is inevitable.

If an LPA is content that a development meets the requirements for consideration under the planning process, the first step in addressing this justification test, is the production of a Flood Consequences Assessment, in line with Figure 9 of the new TAN15 guidance.

The prime objective of a Flood Consequence Assessment (FCA) is to develop a full appreciation of the risks and consequences of flooding and demonstrate the development can be implemented with minimal risk to life and property, without increasing flood risk elsewhere. Once a Flood Consequence Assessment has been undertaken, it can be used as part of a suitable planning application (if a favourable outcome is achieved) or can be used to target further specialised assessment, such as flood modelling, development iteration and discussions with stake holders and regulators.

For all sites (discounting highly vulnerable development in Zone 3) there needs to be a justification test, which includes:

Ultimately, the new TAN15 flooding guidance may make development more difficult (or in fact preclude) development in some areas, however, in these areas, it is likely that permissible development would have been marginally suitable under the older guidance.

The new approach to assessment and development aimed at creating a system that allows Wales to continue to develop, whilst providing surety on the suitability of development and impacts of climate change. Download and keep our TAN15 Quick Guide.

We have been producing Flood Consequences Assessment in Wales for over 15 years (see our Caerphilly Case Study) and have witnessed the evolution of the information and considerations required as part of these assessments.

We regularly work closely with stakeholders and regulators in order to approach developments in a practicable and safe way, whilst maintaining a pragmatic approach for our clients.  Some of our previous FCA case studies can be found here.