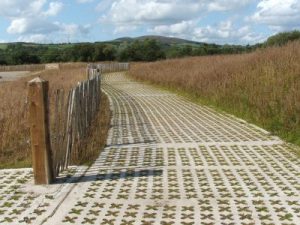 What are Sustainable Drainage Solutions?


When rain falls on to permeable surfaces it soaks into the ground through infiltration, which acts as a natural disposal/redistribution of surface water – the original Sustainable Drainage Solution. In urban areas which have been developed, this is prevented as the natural surfaces are often covered by buildings, paving and other hard surface finishes, which limit the potential for natural infiltration.

Historically in urban areas, drainage networks consisting of pipes and culverts, capture the surface water that cannot infiltrate and divert it to local treatment plants and/or watercourses. Whilst these techniques have been used for many years, there have been instances has resulted in downstream flooding and deterioration in river water quality caused when piped systems are overwhelmed releasing untreated waters into rivers.

Sustainable drainage solutions aim to alleviate these problems by storing, attenuating and disposing of surface water at source.  Whilst the style and purpose of each design of SuDS can vary, they are generally designed in compliance with the SuDS Manual (CIRIA 743) with the more traditional and easily recognised solutions generally comprising the use of soakaway chambers.

Ever wondered where the rain goes?

The use of soakaways in a development has until recently been addressed through the general requirements of planning applications, in line with discussions with infrastructure regulators such as Welsh Water. From the 7th January 2019, developers will see the strict implementation of new legislation with regard to the management of surface waters, which will become law and any new residential development of more than one property or non residential construction area of 100m2 or greater will be required to manage surface water collection, attenuation and disposal on site. The planning aspects, validation and adoption of SuDS following 7th January 2019 will be dealt with by SuDS Approval Bodies (SABS) within each Local Authority. More information on the forthcoming regulatory aspects can be found here.

Testing and Assessment For SuDS

In order to design Sustainable Drainage Solutions, it is necessary to obtain information on the infiltration (permeability) characteristics of the receiving soils.  Testing is routinely undertaken in general or full accordance with BRE365:2016 and comprises the excavation of test pits at predetermined positions, with clean water added from a large capacity bowser/tanker and the water level monitored as it percolated into the soil.  Where test pits demonstrate side wall instability (spalling) either under self weight or once water is added, clean stone can be added to support the sides and an monitoring standpipe constructed centrally within the pit.

Once water has been added to the test pit, the drop in water head is recorded with the infiltration rate calculated from the time taken for the water to fall between the 75% and 25% full level. Where insufficient time was available for the water level to fall to the 25% full level, but a significant drop in water level is recorded, the infiltration rate can be estimated by extrapolating the test results.

Where the water level only dropped marginally during the available test period (e.g. not as far as the 75% full level), it is considered that there is insufficient data to allow a valid extrapolation with any confidence and no infiltration rate can be estimated.

Whilst the use of large size soakaway tests is preferred, these can be supplemented with the use of Falling Head Permeability tests undertaken in boreholes, however, these are considered to providing supporting information, with the large soakaway tests, replicating the likely behaviour of subsequent SuDS.

Permeability values are reported in metres per second (m/s) and range from <10x-9m/s for a clean clay deposits to >10-2m/s for a clean gravel absent of fine content which can block poor spaces (Brassington, 2006). Available published data suggests that as little as 10% fines content can significantly retard the permeability of soils and non comparable results are often identified within the confines of one development.

Use of Sustainable Drainage

Once a suitable assessment has been undertaken and indicative permeabilities have been established for the site, SuDS can be appropriately designed. In line with the post 7th January 2019 requirements, the automatic consideration of buried soakaway chambers will be discouraged and developers will be required to consider the use of swales, ponds and other surface water storage and attenuation features prior to consideration of buried chambers.

A number of other regulatory requirements will also be necessary as part of the SuDs approval process and may require liaison with non regulatory consultees such as Natural Resources Wales (NRW) and the Environment Agency (EA – England).  Where a soakaway is located within influence of a surface water course, a discharge consent may be required; where the use of SuDS is to be undertaken within smaller developments, they will need to be located away from properties, boundaries and slopes.

Where SuDS are to be used within or above a protected aquifer or Source Protection Zone, it is likely, detailed liaison with Natural Resources Wales or the Environment Agency will be required and will also have to consider the impact of potential mobilisation of contaminants downward into the sensitive strata and the requirement for interceptors and/or treatment of collected surface water prior to release.