A rock slope failure in Cwmavon caused a road closure. We undertook an assessment of stability and likely failure mechanisms, including an options appraisal for rock slope stabilisation. This defined subsequent remedial work and enabled reopening of this crucial valley road link. 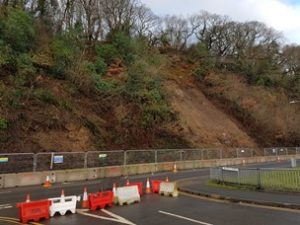 During a recent winter, rock slope instability was identified on a hillside above the B4286 to the west of Cwmavon, Port Talbot, which led to frequent rock falls, particularly after inclement weather, and required closure of the road.

We carried out an assessment which comprised a geotechnical desk study, including a review of the site history alongside the anticipated geological model, followed by a rock slope inspection and rock exposure mapping to obtain information on the nature and structure of the rock slope.

Cwmavon is a known area of high potential for natural and man-made landslides due to the natural geology, topography and former industrialisation.

Our work assessed the likely failure mechanisms, probable causes and contributing factors, with available evidence pointing towards ravelling and block failure, that had been exacerbated by rainfall flowing over the slope face and the presence of heavy vegetation, rooted at shallow depth across the slope.

This morning I visited the site of the #Cwmavon landslide and received a full progress update from Cllr Galsworthy on the works that have been carried out so far, and what @Nptcouncil propose to do to stabilise the bank to help prevent further issues. #Aberavon #NeathPortTalbot pic.twitter.com/wTrtenglPn

We included feasibility assessment of a number of remedial measures which could help provide short to long term stability of the slope face which comprised:

A range of stabilisation measures have been implemented, which include improved drainage, vegetation management, rock netting anchored to the slope face and catch netting at the toe of the slope. The assessment and subsequent remedial works have allowed the reopening of the highway and manage a problematic geological feature.

All potential stabilisation options were considered alongside a tree maintenance programme to reduce the height of large trees and promote growth of lower height vegetation to help stabilise shallow soils.