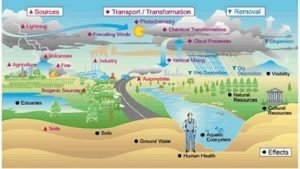 
Risk is normally defined as some adverse outcome which has a probability and a magnitude about which there is uncertainty. Contaminated land risk assessment is still underpinned largely by scientific research carried out for other purposes. Soil and groundwater pollution is dynamic. Pollutants may degrade, disperse and transform with time. Hence risks may decrease or increase in time depending on land use, soil and aquifer.

The skills and complexities required to communicate risk associated with contaminated land to the satisfaction of all parties have risen considerably over recent decades. Today, land contamination is no-longer perceived in terms of a few severe incidents, but rather as a widespread infrastructural problem of varying intensity and significance. It is widely recognised that drastic risk-control, for example cleaning up all sites to background concentrations, or levels suitable for the most sensitive land use, is neither technically or economically feasible. As a result of this, since the early 1980’s in the UK, Contaminated Land Risk Assessment, Risk Management and Reduction has become possibly the greatest hazard in land development.

Restoration of derelict land commenced in the UK following the 1966 Aberfan colliery disaster. The aim of the government was to remove the worst effects of historic industrial activity by funding schemes such as the Derelict Land Grant, Urban Programme City Grant and the Urban Development Corporations. Whilst remediation of contamination was included within these frameworks, it was not a primary concern.

Whilst guidance relating to the assessment and redevelopment of contaminated land had existed since the 1970’s, to the casual observer, it must seem as though ‘contaminated land’ did not exist in the UK until 1991 when the Government first issued proposals for the registration of land which may be contaminated.

Until relatively recently, no specific legislation addressed the problem of soil contamination. Wider legislation was used to force necessary land clean-up and to prevent the continued formation of land affected by contamination. These items of legislation were successful in allowing Local Authority planners to assess contamination risks when considering development applications, building control could enforce ground gas mitigation measures, powers prescribed within the Water Resources Act could demand clean-up to avoid pollution of surface and ground waters and waste regulatory authorities could monitor waste disposal activities to minimise contamination of further areas of land.

These advances led to significant conflicts of interest where the actions of planners (trying to encourage development and regeneration in their area) did not meet the expected standards of building control, which had retrospective remedial powers, and the waste regulatory authority decisions on disposal of contaminated soils during reclamation schemes could conflict with those agreed with other regulators.

In the mid 1970’s, several local authorities reported that they were experiencing problems in redeveloping industrial land which had become contaminated as a result of previous uses. In order to provide a co-ordinated response to these difficulties the Government established the ‘Interdepartmental Committee for the Redevelopment of Contaminated Land (ICRCL). This committee comprised several Government departments and the early objectives of the committee were to increase awareness of the potential problems associated with contaminated land, produce technical guidance and promote. An important output of the committee was a series of Guidance Notes, probably the best known of which is ICRCL Guidance Note 59/83, first published in 1983 and subsequently updated in 1987.

ICRCL 59/83 set out a systematic approach for the assessment of contaminated sites and Risk Management and Reduction. The paper acknowledges the impact of ‘natural’ levels of contamination from mineralised rocks and soils however, prescribes that the emphasis of the paper relates to ’man-made’ contamination. The document was designed to provide advice to those who may have responsibilities with respect to the planning implications of contamination and with guidance on the recognition, investigation and assessment of sites that may be contaminated.

The report provides examples of contaminated sites and attempts to identify links between former land-uses and anticipated contamination, in addition describing likely health effects caused by those contaminants. Hazard pathways are described and the influence of construction activities on exacerbating these hazards are discussed.

The following sequence of questions and their answers are suggested in ICRCL 59/83 to be required in order to adequately assess a site: (Note the term Hazard is likely to refer to what is now described as a Risk):

The systematic approach summarised below, is described in detail within the guidance note to help satisfy the questions above:

As summarised above, a range of documents existed reflect the generally reactive nature of contaminated land risk assessment historically adopted in the UK. Each contaminated land hazard was addressed by differing bodies, under separate documents at different times despite the natural inter-relationships between each topic. Few documents existed that brought together each of those hazards, in an attempt to formalise land contamination Risk Management and Reduction. These documents are summarised below.

BS10175 2001: Investigation of Potentially Contaminated Sites – Code of Practice (Since updated further in 2017)

This British Standard is an update of the previous BS document, DD175:1988. The guidance presented is applicable to the investigation of all potentially contaminated sites and also to land with naturally enhanced concentrations of potentially harmful substances. In summary, the document covers:

The standard is intended for use by those with some understanding of the risk-based approach to sites and site investigations. It does not include any procedures for the formal assessment of the potential risks posed by contaminated land.

CLR11 was published in partnership, by DEFRA and the Environment Agency. Having been developed over some 12 years, the key intention of the document was ‘to provide a technical framework for structured decision making about land contamination’ and has been designed to ‘assist all those involved with, or interested in risk management of land affected by contamination’. 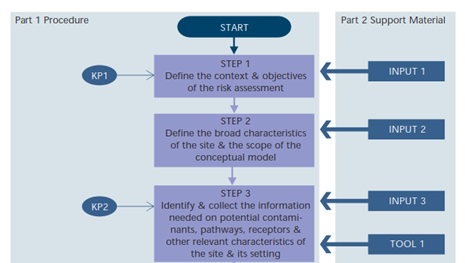 The MP document comprises over 200 pages however, it can realistically be treated as three separate documents (‘Parts’) bound together, as distinct differences between the parts can be made.

The Procedures section is the most significant part of the document where the following two sections provide supporting information. Chapters within the Procedures section briefly describe the main stages involved in the part of the process and provide flow-charts that outline the model procedure for each stage. Each flow chart includes Key Points relevant to the following process and direct links to the supporting technical information in Part 2. The Procedures Section focuses on clearly defining the decision-making process, and the key principles that underpin it, rather than providing detailed information on technical activities or legal requirements.

This document sets the context of the risk assessment process within an overall risk management approach, through a process of identifying and making decisions concerning risks, and subsequent implementation of these decisions.

The methodology promotes a qualitative method of interpreting findings and requires the classification of:

The classifications defined above are then compared to indicate the risk presented by each pollutant linkage, allowing evaluation of a risk category. The document provides summary descriptions/examples of scenarios which is helpful in selecting an appropriate Consequence/Probability Descriptor.