Significant cost savings were created at this residential development of some 90no. properties through site specific risk assessment of potential risks to human health identified during the Desk Study and initial site investigation.

We identified a potential hazard of elevated levels of arsenic contamination at the site, based on evidence obtained during our Desk Study from the British Geological Survey and later confirmed following analysis of the natural soils during site investigation works. Examination of potential risks from arsenic to the site end users (residents) were recommended so that a site specific risk assessment could be undertaken to determine whether the elevated levels identified were persistent in garden and landscaped areas and whether the bio-accessible fraction of arsenic (i.e. the proportion of arsenic that is absorbed by the body) was at a level which could cause harm to the future residents.

Site specific assessment showed the levels of arsenic were well below the calculated threshold and the risk to the future residents was considered low. 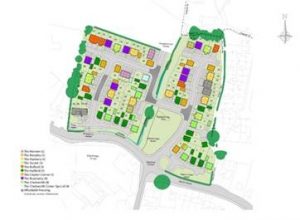 Our site investigation identified that more than 30% of the natural soils had elevated arsenic levels compared to the Soil Guideline Values (SGVs) for the proposed residential end-use. For arsenic, the main risk for the residential land use is the ingestion pathway, with ingestion of soil and dust, and the consumption of home-grown produce and attached soil contributing around 99% of the total exposure pathways. The target concentration assumes that all of the contaminants is absorbed by the body, however more commonly, a proportion passes through and only the bio-accessible fraction is absorbed.

Further shallow sampling was undertaken in areas of gardens and landscaping and analysis undertaken. Selected samples were chosen to analyse the bio-accessible fractions of arsenic within the shallow soils using the Bio-accessibility Research Group of Europe (BARGE) unified bio-accessibility method to determine how much arsenic could be absorbed by the body.

Local Planning Authorities often place a planning condition on developments that states development shall not begin until a scheme to deal with contamination on a site has been submitted and approved in writing.

We generated a revised site specific criteria for arsenic which showed the levels recorded were well below this threshold value. Therefore, the risk to the future residents was considered low and no mitigation works were required.