Scoping, design, supervision, implementation, remediation and assessment of a former aluminium tube factory in accordance with BS:5930, BS:10175 and BS:8485 to facilitate a proposed residential development.

Soil and groundwater hydrocarbon contamination was delineated and sustainable remedial works were carefully designed and implemented by ESP which included recycling of the removed soils and re-use of concrete infrastructure on-site to reinstate excavations.

Considering the sensitive hydrogeological setting, potentially significant liabilities were mitigated and regulatory approval was achieved following robust validation and verification of the works. 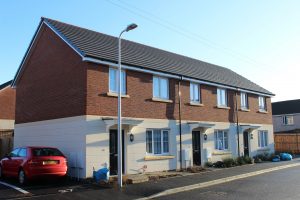 Targeted multi technique investigation informed by desk study data and our own findings as each phase progressed allowed a robust understanding of the conceptual ground model and accurate delineation of localised soil and groundwater hydrocarbon contamination. Two main areas of concern were identified associated with a former oil heater system and a former above ground fuel storage tank. The contamination plume was limited to the shallow Made Ground and underlying fine and coarse grained glacial soils.

Detailed human health, gas and controlled water assessment allowed ESP to confirm the risks posed and design focused remedial works to address the risks in the areas of concern and an accompanying implementation plan setting out how these remedial objectives would be achieved. This included the development of a site-specific asbestos method statement for the works and temporary works design due to public pathways adjacent to areas of concern. 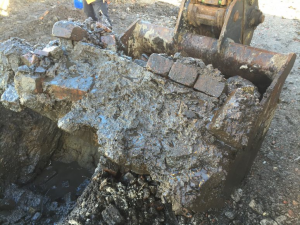 Remediation consisted of source removal in delineated areas of concern, and recycling of the contaminated soils removed at a nearby treatment facility to allow re-use. Pathway management was recommended to mitigate long term risks to human health, where source removal or proposed level changes did not eliminate the risks. The remedial requirements were effectively communicated with the Client via a series of plans which enabled them to plan and prioritise construction works in low risk areas while remedial works were undertaken in others. Prior to undertaking the remedial works, the strategy was discussed with Natural Resources Wales (NRW) and agreement in principle was achieved.

During the source removal works, ESP collected and interpreted in-situ evidence (visual, olfactory and photo ionisation detector) to accurately determine the limits of excavation and limit unnecessary removal. The excavations were discontinued both vertically and laterally where the levels were below pre-agreed target criteria, or vertically upon encountering groundwater, to ensure that no mobile contamination was introduced to the underlying aquifers. The contamination plumes in both areas of concern extended in a south west direction, which supported the anticipated groundwater gradient based on groundwater monitoring. 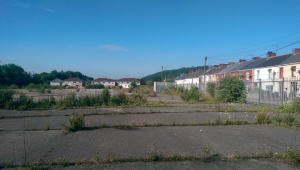 To ensure a sustainable approach, the concrete floor slab formerly present across the site was crushed on-site to a 6F2 grading and was used to methodically backfill the excavations (in accordance with the Specification for Highway Works) following verification of chemical and geotechnical suitability.

Post remediation groundwater sampling and hydrogeological assessment confirmed that the residual contamination within the aquifers would pose a low risk to controlled waters. Gas monitoring also verified the recommended protection measures were appropriate and had not changed following the remedial earthworks. The validation report gained acceptance by NRW and enabled the residential development.