Wiltshire Council were assessing the sale of a parcel of land and wanted to include a site investigation report within the development pack. The site is loctaed in a residential area of Wiltshire. The brownfield land was occupied by single-storey garages and we were instructed to undertake an integrated Desk Study, Geotechnical and Geo-environmental Assessment for a residential development end use. 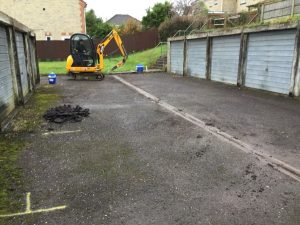 As part of a pre-sale Land Assessment, our Phase 1 Desk Study showed that the site was developed with garages sometime between 1956 and 1977 and that it was likely to be underlain by the West Melbury Marly Chalk Formation of the Lower Chalk. This is a Principal Aquifer and sensitive to pollution/contamination.

Our client wished to provide information on the feasibility of shallow soakaways and a scope of works was designed by us which adopted appropriate investigation techniques to obtain the required information, whilst limiting the impact of the site investigation. The scope included trial pitting, windowless sample boreholes, soakaway testing in accordance to BRE 365, geotechnical and geo-environmental testing and on-site volatile hydrocarbon screening.  The site investigation was carried out in accordance with BS5930:2015.

The investigation encountered a thin layer of Made Ground overlying the bedrock of the West Melbury Marly Chalk Formation which was also logged in accordance with guidelines published by CIRIA (C574, 2002).

One of the potential sources of contamination at this site was the possibility of fuel leaks or spill and in-situ sting was undertaken to screen samples for volatile hydrocarbons.  The screening suggested no impact to the soils or chalk aquifer from fuel leaks and laboratory testing confirmed the site findings.

In summary, whilst the site was relatively small, issues arose that needed careful consideration. Our recommendations to enable a residential end use and the feasibility of soakaways were provided succinctly in our pre-sale land assessment.