ESP have provided a rapid response to the landslide issues at Pantteg and have created an accurate hazard and risk assessment based on the most up to date methods of landslide and geohazard assessment. This has been through the creation of a dedicated project team of engineering geologists and technicians.

We have worked efficiently and with tight deadlines to deliver and communicate important information to the residents of Pantteg. This has been implemented in a way that considers the needs of a number of different stakeholders, as well as being sympathetic to the residents who are affected by our assessments. 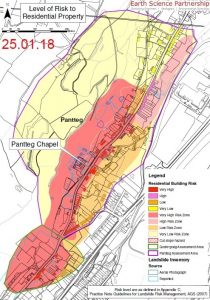 Over the last few years, we have been working on behalf of Neath Port Talbot County Borough Council to deliver a landslide assessment to define the hazards and risks at Pantteg, a small village in the Swansea Valley. The landslide system is very active and further instability is likely to occur on a frequent basis.

The current phase of work started following ground movements in February 2017 and the residents were evacuated after further movement in June 2017, but the area has experienced stability issues since 1897.

We have carried out a Lidar survey of the village in addition to movement monitoring to create a hazard and risk map of the area. Local residents were given the opportunity to see a 3D fly-through model showing the landslip area and other detailed information at a public meeting, at which our Matthew Eynon presented to and answered questions from residents and other stakeholders.

“We have used huge resources and a large amount of public money and have engaged trusted geological experts to give residents in the Pantteg area a greater understanding of the land that surrounds them and which they live on”. “Earth Science Partnership is now providing residents in the Pantteg area with the most detailed information they possibly can about the risks posed by landslides which have plagued this area going back at least to the 1890s,” said Neath Port Talbot Council leader Rob Jones.

Testimonial from the Head of Engineering & Transport (NPTCBC)

“The Earth Science Partnership have provided professional and technical advice for Neath Port Talbot County Borough Council on a number of projects of different sizes and complexity since early 2015. Whilst working for the Council, they have provided a number of different ground investigation solutions and advice.”

They have also been appointed to advise on the high profile Pantteg and Godre’r Graig Landslide since 2015 and have provided a number of factual reports that are helping Neath Port Talbot to formulate a Management Strategy for the area.

Part of ESP’s work involved the production of a Ground Instability Risk Map of Pantteg and then a Residential Property Risk Map.  They have also attended televised public meetings to discuss their findings following the publication of the work and have given Expert Witness evidence on behalf of Neath Port Talbot at Residential Property Tribunals.

As part of their works they have employed a number of techniques some of which are listed below:-

In closing, I can advise that we have had a positive experience in working with ESP and their employees who have always acted professionally and supplied information and reports within agreed timescales.”