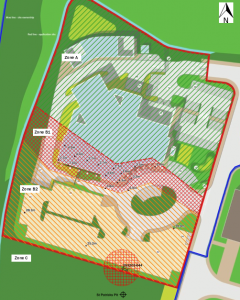 We have recently been involved at this site to provide a Mining Risk Assessment for a new Dyfed Powys Police facility in Llanelli. Previous treatment works undertaken in the 1990’s identified historical coal mining, including extensive voids and collapse of supporting roof rock.

Following a targeted investigation, comprising trial pitting, trial trenching and rotary drilling, we were able to refine the ground model and provide accurate risk zoning, detailing areas requiring mitigation, as well as identifying low risk zones which would not require any remedial works. The investigation also confirmed a low risk linked to a mine adit.

The additional information obtained during this advanced Coal Mining Risk Assessment allowed us to zone the site into four separate areas after accurately locating the outcrop of the Swansea Four Feet coal seam and areas of surface and shallow mine workings.

Through detailed review, experience and focussed investigation, we were able to identify remaining risks at the site and refine the ground model to enable accurate design of future subsidence risk mitigation works, as well as establish low risk zones.