Mining in Wiltshire: Underground mineral workings were located beneath a proposed residential development, the associated subsidence risks were evaluated, and risk mitigation measures recommended on a plot by plot basis. In addition, the shallow ground conditions were assessed and recommendations made regarding foundation, highway and soakaway design, including an assessment of the excavatability of the shallow bedrock for drainage infrastructure. 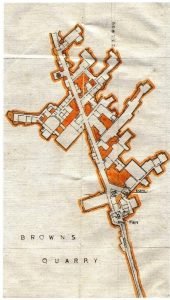 Mining in Wiltshire for ‘Bath Stone’ has occurred since the 19th Century.  These workings are known as ‘quarries’, although they are all underground and are commonly accessed from mine shafts.

A thorough desk study review indicated that a relatively narrow ‘arm’ of one such quarry (Brown’s Quarry – see extract) extended into the Client’s proposed development area.  Careful collation of information contained within a number of published data sources (some of which were poorly scaled) allowed an assessment of the likely position of this ‘arm’ of the old quarry within the proposed development area, and the depth and extent of the underground voided workings were accurately located using rotary probe drilling.  Rotary coring was subsequently undertaken within the bedrock above the identified voids to allow an assessment of the rock quality within the roof above the workings and, from this, an assessment was made of the potential for future subsidence.

The investigation identified voids of up to 7.3m height beneath the site, overlain by 15 to 19m of bedrock of the Forest Marble, Corsham Limestone, Bath Oolite, and Twinhoe Limestone.  Assessment of the subsidence risks indicated that only four plots were potentially at risk.

The risk mitigation was complicated by the fact that the old underground workings were used during World War Two and are still managed by the Ministry of Defence.  ESP recommended reinforced raft foundations, with geo-grid support in external areas and beneath roads.  Our recommended risk mitigation was agreed by the NHBC allowing development to proceed. Get in touch if you have a land issue related to mining in Wiltshire.

In addition, to the above, as part of the investigation and assessment, ESP provided recommendations for the design of foundations, highways and soakaways across the remainder of the site, and an assessment of excavatability for an attenuation pond within shallow limestone bedrock.