On the northern and southern margins of the South Wales Coalfield (and in the Forest of Dean), coal is not the only mineral which has been extensively worked underground.

Sandstone rich in iron (ironstone) has also been worked and has left a legacy of underground workings which need to be considered in design and construction of developments in the area. Ironstone workings are also present in other areas of the coalfield, including Staffordshire and Yorkshire. 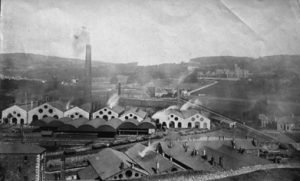 Ironstone occurs in bands or veins within the basal horizons of the Lower Coal Measures, commonly worked underground in areas such as Blaenavon, Tredegar and Merthyr Tydfil on the northern margins of the coalfield and around Llanharan and Taffs Well (Garth Mountain) in the southern margins.  Ironstone was also worked in many places within the Forest of Dean. This creates potential Ironstone Mining Hazards where present.

Some of the workings to win ironstone date back to Roman times (e.g. beneath Garth Mountain), but ironstone became commercially important from the late 18th Century onwards, particularly as the large iron works became established along the northern crop of the coalfield.  In fact, Merthyr Tydfil owes its existence to the local availability of ironstone, limestone and coal along with high rainfall, and plenty of trees; a perfect location for iron working and production.

Geologically, the veins and bands are mainly located around the Garw and Gellideg coal seams in the succession of strata, but occasional veins are found much higher up in younger strata, up to the Upper Pinchin coal seam.  We know over twenty separate ironstone veins in the geological succession in South Wales.

Ironstone workings tended to be from shallow bell pits or adits (tunnels cut into hillsides to access the ironstone).  Partly due to their age, we have fewer records of such workings than we do for coal workings in the same area.

Therefore, a good understanding of the geological succession and the Conceptual Ground Model beneath the site is required to identify if such workings are likely to pose a risk to development. Ironstone workings can be identified by an experienced consultant from anomalous features on historical maps.  A low cost, poorer quality desk study assessment often misses such features and, hence, development risks.

If identified, the risks from ironstone workings are often mitigated in the same way that the risks from coal workings are.  Commonly, stabilisation by drilling and the injection of pfa:cement grout is the most cost effective and technically appropriate solution.

We have a long history of working in areas underlain by the Lower Coal Measures and are highly experienced in identifying the locations, hazards and risks posed by ironstone mining.