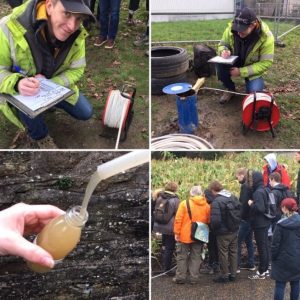 RCTCBC are extending the existing school at Ffynnon Taf Primary, Taff’s Well which is around 150m to the north of the thermal spring. Following the successful delivery of investigations for other school projects in the borough and considering our local knowledge, we were appointed to provide technical oversight and interpretive design support for the works including trial pits, soakaway testing, cable percussion boreholes and rotary drilling.

Desk study review confirmed a likely low mining, contamination and ground gas risk, and emerging conditions indicated that a shallow foundation solution was suitable for the development. We recognised that scope modifications could be made, whilst still achieving the design/regulator requirements for the development. Whilst this would result in cost savings for the engineering department, through discussions with BGS Wales, ESP were aware that the energy department were proposing to use geothermal heating at the school as part of regional and national sustainability efforts. Investigation into feasibility and design had yet to be undertaken.

We enabled a collaborative approach between ourselves, the Local Authority departments and the BGS to utilise overall budget savings for investigation of the geothermal heating resource, thus informing multiple design aspects at the same time.

Ground model and groundwater information for the Taff’s Well area is scarce, particularly at the base of the valley near the river and further understanding had long been desired by the BGS considering their on-going interest in the thermal properties of the spring and it’s extent. Conceptually a ground model consisting of River Alluvium (RA) and Terrace Deposits (TD), followed by coarse grained Glaciofluvial Deposits (GFD) and possibly Glacial Diamicton above Lower Coal Measures bedrock was anticipated, however the nature and thicknesses of these superficial strata were unknown. Cable percussion drilling proved coarse grained fluvial deposits to around 17.5m (RA, TD and GFD) with fine grained soils (possible Glacial Diamicton) being encountered beneath. The base of the superficial strata remained unproven at 18.3m bgl.

Temperature profile monitoring within the shallow and deeper superficial deposits indicated the temperature was generally around 12ºC, which is near normal, and colder than the nearby thermal spring (21ºC). As well as obtaining spot monitoring information from the boreholes, a sensor recording water level and temperature every 30 minutes was installed in the deeper borehole within the Glaciofluvial Deposits to obtain continuous monitoring data. This will then allow future relative comparison with similar data being obtained from the thermal spring.

As well as facilitating local scientific objectives, community benefit was also achieved for Cardiff University and it’s students. Groundwater sampling and the measurement of in-situ parameters is an essential part of site investigation and two practical lessons were held by the BGS at the site, with the students gaining valuable experience in field monitoring.

There is a potential for similar and larger schemes across Wales and local authorities are actively investigating their practical and financial feasibility. Taff’s Well (the location of our head office) is home to Wales’s only thermal spring, and as a result is an obvious source for environmentally friendly energy in the area. The local authority are looking to use this secure and sustainable source of heating for existing and proposed developments (e.g. the Pavillion and local school).

With decreasing fossil fuel resources and increased evidence for climate change effects associated with global warming, adaption of energy sources is being pursued and assessed in earnest to reduce greenhouse gas emissions and meet sustainability targets.

Space and water heating accounts for a significant proportion of UK domestic energy consumption and is dominated by carbon-emitting gas-ﬁred heating systems. Geothermal heating alternatives are widely accepted as an alternative energy supply and two types of system are used to part or fully substitute carbon reliant systems:

Low carbon heating alternatives are widely used in tectonically or volcanic active countries (e.g. Iceland), where an abundant and obvious heat source exists. In Wales, heat sources may not seem as widely available, however successful schemes in other nations and local studies indicate that our industrial heritage and urban development may offer viable opportunities to reduce our carbon output in an environmentally friendly and cost effective way.

Our mining legacy is considered an environmental blight, however the water that know has flooded the historic workings has been demonstrated to be a potential sustainable resource for low enthalpy heating. The Coal Authority are actively encouraging use of the resource, and government funding is available, however considering their widespread abundance in South Wales, harnessing of the energy source has been limited to date. Proof of concept has been demonstrated in Crynant, Dulais Valley where an open loop scheme abstracts mine water at ~11.5 °C from the workings in the Coal Measures, providing heat and hot water demand for a farmhouse, workshops and an adjoining physiotherapy centre (Farr et al, 2016).

In urban areas, heating of the air and ground is known to occur due to the density of human activity and development (urban heat island effect), and a study in Cardiff (Farr et al, 2017) indicated that shallow groundwater temperatures under the city were 2°C warmer than the UK average, and concluded that the aquifer could sustain ground source heat systems provided they were managed and permitted appropriately. The feasibility of an open loop system sourcing heat from the shallow aquifer has since been proven by a pilot scheme at Grangetown Nursery School (Boon et al 2019), were over the 5 years of operation an 85% reduction in CO2 emissions has been recorded for the school.