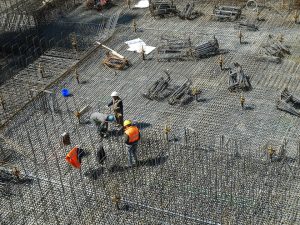 As any land developer or groundworks contractor knows, there is often a collective sigh of relief when all the below ground foundation elements of a project have been completed.  The rest of the project will generally then be relatively straightforward and often proceeding without undue delay. Why is that? Well, the ground is one of the most vital elements in any development (whether it be the support it provides to foundations or the potential for contaminated land impacting on future users), but it is commonly the one element about which the least is known prior to the project commencing.

Various reports by the ICE and other bodies have identified that the greatest technical and financial risks to developments normally lie within the ground and foundations.  In a paper co-authored by our Matthew Eynon in 20151, a statistical review revealed the following:

Numerous surveys have found that around one third of building projects over the last 30 years have over-run by at least one month or more, and around half suffer delays from ‘unforeseen ground conditions’.

The Cost of Being Cheap

Given the above, it is clear that the ground is a hazard and needs to be fully understood to allow an appropriate foundation design to be achieved.  Therefore, the sensible approach would surely be to undertake a comprehensive site investigation, with a suitable number and spacing of boreholes and/or trial pits, and appropriate contamination and other testing, based on the site history, setting and the proposed development.  This is the only way of reducing your potential for unnecessary and costly delays during the foundation construction phase.

However, how often is the investigation awarded to the lowest tenderer who almost certainly will be offering the minimum number of boreholes and/or trial pits and the smallest number of samples to be tested?  It is well established that investigations bought cheaply almost always fail to present an accurate account of the ground or groundwater conditions, and common sense indicates that the greater the number of exploratory holes included in the investigation, the greater the chance you have of identifying any particular ground hazard and, therefore, reducing the potential for costly construction delays due to ‘unforeseen ground conditions’.

The costs of site investigation relative to total development costs are actually very small, commonly less than 0.3%, and have been driven down further in real terms in recent years.  In many circumstances, the costs of redesigning ground elements, or mobilising alternative construction methods, when the contractor has started on site usually far exceed the costs of undertaking an appropriately scoped site investigation in the first place.  Is it really cost effective to spend such a small proportion of the project costs on assessing the one element of the development about which the least is known, and which has the capacity to increase project costs (and potentially embarrassing time delays) by the greatest amount?

Notwithstanding the above, it is not just about spending more money on investigations. They also need to be appropriately designed and implemented to be fit for purpose.  Highways schemes are often preceded by high cost site investigations with a large number of boreholes and/or trial pits, but it is not unknown for ‘unforeseen ground conditions’ to be encountered during the construction phase due to inadequate scoping or planning of the investigations initially, or because of poor interpretation of the results.

Although ground hazards may be ‘unforeseen’ at construction stage, there are few ground hazards that are actually ‘unforeseeable’ provided that a suitable site investigation is designed, implemented and assessed by a geotechnical/geo-environmental specialist.  The British Standard on site investigation (BS5930:20152) requires that any site investigation should be designed and implemented by a ‘geotechnical advisor’.  How many investigations for small to medium sized building projects are scoped and designed by architects or structural engineers with an extremely limited knowledge of ground conditions and potential local ground hazards at any site?  How many are simply based on the premise that ‘what we did on the last site will do again on this site’?  In these instances, not only might the investigations be inadequate for the proposed development on that particular site, hence leading to costly delays, but the designer may also be deemed negligent.

The ICE have reported that less than 20% of site investigations in the UK are designed and managed by geotechnical specialists.  Would the majority of investigations, therefore, be considered to meet the requirements of BS5930?

There is an old saying which still holds true:

‘You pay for a site investigation, whether you have one or not.’

Why take the risk? Get in touch with us to discuss your site requirements.

See also:  What Site Investigation Do I Need?

Why do I need to pay for Site Investigation?