Zoning of the site allowed the site-layout to be redesigned to minimise development costs and contractual risks. Liaison and presentation of information to the Local Authority and Environment Agency allowed their opinions and concerns to be acknowledged and addressed at an early stage. 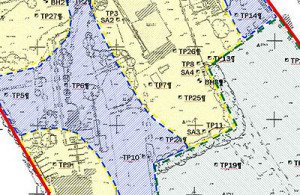 ESP were employed to undertake a Geoenvironmental Investigation across a site in Somerset to provide engineering data that would assist in the scheme design and satisfy conditions of the planning permission.

This large site comprised a cluster of smaller sites that had been affected by differing historic land uses. Some parts of the site had remained largely vacant, where-as some parts were occupied by railway lines/sidings, a number of commercial uses, and a transport yard.

The physical works allowed derivation of the conceptual site model, which identified variable depths of Made Ground (absent in some places), and varying occurrences of superficial deposits, with weathered rock close to the surface in a number of areas.

ESP’s exploratory works were designed to establish, with confidence, the changing ground conditions across the site which allowed presentation of a zoned site, according to foundation and contamination conditions. The village layout was then re-designed using this zoning to allow the most economical development of the scheme.