We undertook investigation, assessment and design of earthworks for a proposed residential development in Weston Super Mare. Part of the development was underlain by low strength and compressible alluvial soils, the depth and lateral extent of which was established to allow bespoke foundation solutions for individual dwellings. For flood relief purposes, the land underlain by the alluvial soils had to be raised and we designed and managed works to mitigate settlement risks, comprising the installation of vertical drains and surcharging. At the time of writing, settlements beneath Phase One of the development had been completed and the NHBC agreed that the construction of the dwellings was able to proceed as per the Client’s construction programme. 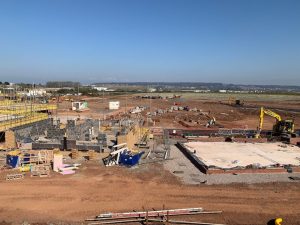 The proposed residential development site comprised two areas of slightly elevated ground, with a central and western lower-lying area underlain by up to 9m of low strength earthworks and compressible soils, including a peat band (the well-known Datum Peat).

A phased investigation, including cone penetration testing and dissipation testing, was undertaken to confirm the Conceptual Ground Model and, in particular, to delineate the lateral extent of the soft, compressible alluvial soils.  Foundation options were provided for the dwellings located on the shallow Mercia Mudstone and Blue Anchor Formation soils, and on a plot-by-plot for dwellings on the margins of the alluvial soils.

In the area where ground levels were to be raised, settlement could have taken decades to have occurred.

A lightweight foundation solution was selected by the Client which reduced possible magnitudes of settlements in this area, however, the anticipated time for settlement was not acceptable.  Therefore, we designed and managed the installation of vertical drains and surcharging in order to accelerate settlements to within a time period acceptable to the Client.

Vertical drains comprise geotextile drains which are installed on a pattern and spacing determined in our design, to the full depth of the compressible soils.

These drains shorten the drainage paths for excess pore pressures within the alluvial soils built up by the filling process and accelerate settlements.

Additional fill (surcharge) was temporarily placed above the finished levels to ‘over-consolidate’ the underlying earthworks and compressible soils and assist in the mitigation of settlement risks. The magnitude and rate of settlement was measured via the installation of vibrating wire piezometers (to measure the dissipation of excess pore pressures within the alluvial soils) and settlement plates.

Phase One of the development on the alluvial soils has been completed, and our completion report was accepted by the NHBC, allowing dwellings to be constructed as per the construction programme.

We also prepared a Material Management Plan for the re-use of materials excavated from a nearby development site as fill for the development, and completed a working platform design for the vertical drain installation rig.