We scoped, designed, supervised, implemented and reported a main investigation at a Coal Mining Legacy site in accordance with BS:5930, BS:10175 and BS:8485 to enable proposed industrial development and discharge planning conditions.

Focused investigation allowed understanding of a variable conceptual model influenced by anthropogenic activity and historic fluvial/glaciofluvial processes, which reduced cost uncertainty for the development design and construction team. This included an updated coal mining risk assessment, which zoned the potential collapse zones associated with an on and off-site mine shaft based on site specific findings allowing the design layout to be progressed and future remedial action/management strategies to be developed.

A temporary suspension in the works due to the Covid-19 lockdown was taken advantage of by the project team. Findings to date were evaluated, and the preliminary structural design was progressed, with outstanding information requirements identified and then targeted during the subsequent re-mobilisation.

A portal framed industrial unit is proposed on a Coal Mining Legacy site within an existing industrial estate. The Client had obtained planning permission for the proposed development, but the Local Planning Authority imposed a number of ground related planning conditions. Previous trial pitting had allowed a preliminary layout to be progressed, however cost, design and regulatory uncertainty remained for the Client and development team.

The site had historically been developed as a mine with associated railway land and spoil heaps (see historical map) and later levelled to create a development platform with the on-site river channel infilled and displaced to the south. A capped shaft associated with the former mine was present in the north portion and this had potentially significant implications for the development due to associated risks. The risk from shallow mine workings had been assessed to be low during the previous investigation, with the mine workings located at significant depth. 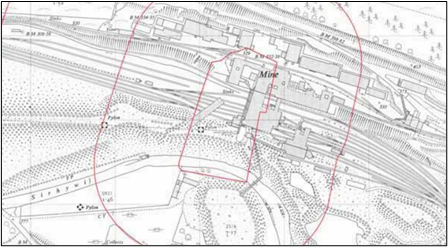 We were engaged to enable finalisation of the development design, discharge regulatory requirements and to provide reduced uncertainty for construction phase cost proposals. A robust investigation strategy was developed with the project team. Information requirements were reviewed based on emerging conditions.

Targeted investigation near the mine shaft and elsewhere identified variable thicknesses of Made Ground, Glaciofluvial Deposits and Coal Measures bedrock. The Made Ground increased in thickness towards the historic river channel and areas of former infrastructure (e.g. railway cutting). The bedrock profile also increased in depth from north to south due erosion; critical to inform piling depths for the main building and ancillary structures. Due to the thick Made Ground and proposed heavily loaded floor slabs, consideration of vibro-replacement to provide additional support and consistent performance across the slab footprint was recommended.

A mine shaft cap was located, therefore the layout and design needed to consider stability implications and restrict loads that might translate to the shaft lining or cause the bearing capacity failure of the superficial deposits. When assessing the potential for surface subsidence which the failure of a shaft can cause, it is important to estimate potential lateral extents of collapse zones; the surface crater can be many times the shaft diameter. 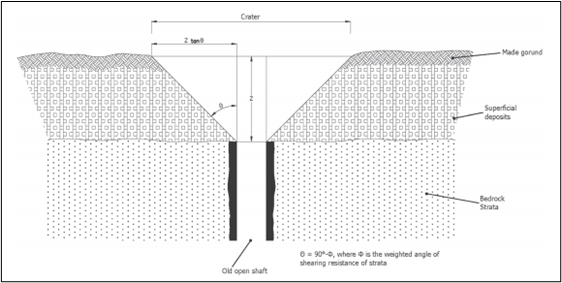 Mitigation options include shaft specific measures (e.g. anchored geosynthetic, drill and grouting and installing a new reinforced concrete cap at rockhead in accordance with contemporary standards) as well as management strategies for external areas. Consideration of the estimated risk zones require consideration as part of the finalisation of the design of the foundations in the vicinity. The use of piles around the feature would reduce associated risks for buildings on this Coal Mining Legacy project.