Our client has designed a single storey extension to a school to provide additional classroom space in the Dunvant area of Swansea. The area for the proposed extension was the subject of a desk study, coal mining risk assessment, geotechnical assessment and geo-environmental risk assessment. 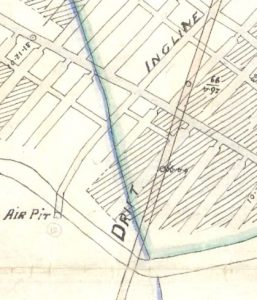 Our initial Coal Mining Investigation suggested that there was a high risk of mining subsidence at the site.  Information from the historical maps, geological map and data from the Coal Authority showed the presence of shafts and adits near the site, a shallow coal seam (the Penclawdd) underlies the site and an abandonment plan showed details of workings directly below the proposed extension.

The presence of coal mine workings was supported by British Geological Survey (BGS) data.  The borehole records available showed workings with a height of about 2m.  However, the BGS boreholes also showed that the coal was absent in two of the records, this did not tie into the information from the Coal Authority and abandonment plan.

Deep rotary boreholes were needed to understand the geology and strata sequence and a phase of rotary open hole showed no presence of coal; this did not fit the ground model of suspected workings below the site.  Therefore, two rotary cored boreholes were drilled that would allow a visual assessment of the rock; these showed that the coal was absent below the proposed extension, indicating that the abandonment plans are inaccurate.

The rotary cored holes showed that the coal was not present, and in its place was a conglomerate. In areas within the coalfield, immediately after deposition of the organic material which would later become lithified as coal, river channels often cut through and removed this organic material, leaving behind coarse-grained materials which lithified as conglomerate or sandstone.  These are known as ‘washouts’ and occur within coal seams across South Wales.  Miners were wary of such features as they often contained significant groundwater (due to their increased permeability relative to the surrounding measures), and often kept clear to prevent flooding of the workings; washout features within coal seams were seldom mined.

This was good news for our Local Authority client as it meant that our investigation enabled us to downgrade the risk of coal mining subsidence from high to low.  This meant that no treatment of shallow coal mining workings was required and the extension can be constructed in the normal time frame with no significant ground-related abnormal costs.

City and County of Swansea