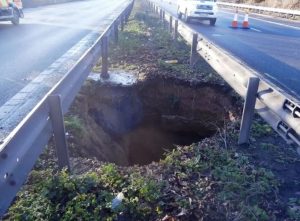 Chalk sinkholes, sometimes hit the UK headlines, particularly in winter, swallowing cars, closing motorways, and causing significant damage to homes. At first glance, the locations of these incidents could appear random, localised areas of the country can be predicted through understanding the local geological, geomorphological and hydrogeological setting.  We often undertake such Chalk Subsidence Hazard Assessments on sites potentially at risk.

How do Chalk Sinkholes form?

Geologically induced, non-mining related subsidence is generally caused by the dissolution of calciferous or gypsiferous bedrock, such as limestone and the chalk bedrock which underlies much of the south and east of the UK.  However, similar features can occur in other geological settings.

Dissolution of the chalk or limestone takes place when mildly acidic infiltration (a weak carbonic acid) flows through fractures in the bedrock, dissolving the wall rock, and causing them to widen to create solution-widened joints and, in time, the caves systems so loved by tourists in places such as Derbyshire and South Wales.  However, such dissolution has a more insidious effect where it occurs at shallow depth beneath developments, where the bedrock above the cavity lacks support and collapses to create a subsidence (crown) hole at the surface.  The rate of dissolution in most geological environments is very slow (although there are geological strata in the UK where dissolution can be quite rapid), but such collapses can occur very quickly, with several recorded instances of a collapse appearing overnight with no previous evidence of a problem.

For areas underlain by chalk bedrock, a thorough understanding of the local geomorphological, hydrological and hydrogeological setting allows an assessment of subsidence risk to be completed.

Collapses of mine shafts can also lead to a similar surface feature.  These are common in coal mining areas, but can also be experienced in areas of other mining.  It is not commonly appreciated, but chalk was also mined across the south-east and east of England, and such shaft collapses can look extremely similar to sink hole collapses (and are often confused by the media).  However, in terms of remediating the collapse feature, it is crucial that the collapse mechanism is completely understood, or considerable time and costs could be wasted.

Where do they occur?

Chalk Sinkholes could occur where the underlying bedrock comprises any calciferous or gypsiferous bedrock, however, they are most likely to occur where the bedrock geology comprises the chalk of Kent, Sussex, Surrey, Hampshire, Dorset, Wiltshire, Buckinghamshire, Hertfordshire, Yorkshire and East Anglia amongst others, or the Permian age strata of Derbyshire and Yorkshire.  However, not all areas underlain by limestones or chalk are at equal risk.

Sinkholes can also occur where groundwater causes erosion of silty or sandy strata, such as in areas of Blown Sand (dunes) which occur in several places around the UK coastline.

What investigation do I need?


The first step is thorough understanding of the geological, hydrogeological and geomorphological setting of the site both in the present day and in geological time (known as a Conceptual Ground Model).  This would allow an assessment of potential subsidence mechanisms and a site specific assessment of the potential risk, using a risk rating method well established in the UK.

Where a moderate or high risk is determined, further targeted intrusive investigation is warranted.  Depending on the site setting and existing site layout, this could include a geophysical survey to identify any anomalous features in the sub-surface, trial trenching to inspect the upper surface of the bedrock, or boreholes to investigate the nature of the ground at greater depth.  Any anomalies identified in the geophysical survey would be targeted by the intrusive investigation.

Depending on the findings of the investigation, suitable risk mitigation strategies may need to be included within the development to ensure that any subsidence impact is minimised.  This may include relocating or even preventing the use of soakaways, as the infiltrating water could initiate collapses.


We have been involved in many sites where potential solution features are present, both across the UK and in desert environments in Iraq and Kurdistan, and have undertaken subsidence hazard assessments for many development projects. For further details or if you would like to discuss a particular site, please contact us.