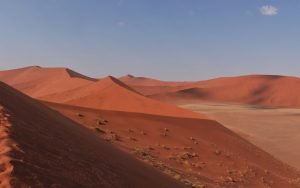 Our Principal Geologist, Jeremy Hucker recently travelled to Africa where he captured this shot of the Namib Naukluft National Park, which includes most of the Namib Desert on the south-western coast of Africa. ‘Namib’ translates from the local language as ‘vast place’, and it certainly is, covering some 20,000 square miles (two and a half times the size of Wales! – why is Wales often used as a unit of measure?), and running up the coast for some 1,200 miles, from South Africa up through Namibia, to Angola.

This picture is from the top of Dune 45, a star dune of around 170m height within Namibia, and one of the few within the National Park you can climb.   The sand originates from the Kalahari Desert to the east, but has been blown in from the Atlantic to the west!   The sand has been dated at 5 million years old, and was eroded from the Kalahari, and washed to the Atlantic Ocean via the Orange River which forms the southern boundary of Namibia with South Africa.  The Benguela Current then carried the sand northwards up the western coast of Africa, before the onshore winds then blow it eastwards to form the Namib Desert – quite a journey.   The Namib Desert can lay claim to possibly be the oldest desert in the world.  Rainfall is infrequent, but valuable moisture for the desert wildlife is gained from the sea fogs which commonly occur on the coast, and drift inland.

When examining sandstone bedrock, at ESP we commonly come across bedding structures within the rock which represent the former surfaces of similar dunes which have become lithified.  Understanding the geomorphology of present day environments such as deserts allows us to understand the geological structures and predict possible failure planes within cuttings and other rock slopes.  As early geologists recognised, in many settings, the ‘present is the key to the past’.