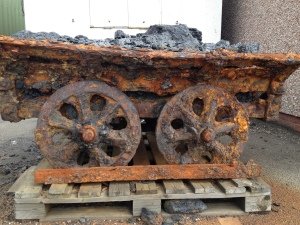 We came across a useful glossary of coal mining terms a while ago, here it is:

A Glossary of Mining Terms used in mid 1800’s

AFTERDAMP. After an explosion the mine was filled by the products of the burning gas. These were mainly carbon monoxide (CO) which is poisonous and carbon dioxide (CO2) which is suffocating.

BALANCER. The person, usually a boy, who operated the balance.

BALANCE. A slope with a pulley at the top where empty tubs pulled full tubs up the slope.

BLOWER.   Large amounts of methane gas is trapped under pressure in the coal and will seep out. If a large reservoir is broken into then it will blow out of the coal.

BRATTICE. Fresh air was directed to the ends of the workings by constructing wooden frames down the centre of the tunnel and covering the frame with thick canvas brattice cloth that was nailed to the frame

BANKSMAN  The man at the surface who was in charge of the or pit bank. He was responsible for the loading and

BROWMAN   unloading the cage and signalling to the engineman responsible for winding the cage.

CAGE.     A crude lift that was wound up and down the shaft carrying men and materials. Some cages had more than one deck. The one in use at Wood Pit had two decks.

COAL FACE. The place where the coal is exposed and the colliers “win” it.

COLLIER.  The skilled man who worked at the coal face and actually got the coal.

COLLIERY. The site at the surface that includes all the buildings, railways and headgears.

COUPLER.  A man or boy who worked on the haulage system coupling tubs together.

DATALLER  A man employed to do service work in the mine and paid by the day.

DELF    A Lancashire term to describe a seam of coal e.g. or     Ravenhead Main Delf.

DOWNCAST  The main shaft of the colliery up and down which

SHAFT   men and materials were wound. The fresh air for the ventilation of the main is drawn down this shaft.

DRAWER   The person who is employed by the collier to take full tubs from the workplace to the haulage and bring back empty tubs.

DRAWING  The act of removing props and allowing the roof to

PROPS   fall behind the coal face.

DROP PIT A side tunnel into the shaft. Usually part of the ventilation system.

DUMB PIT A short rising tunnel from the furnace into the upcast shaft. See Ventilation.

ROPE    round two pulleys, one at each end of an incline.

ENGINEMAN The man in the engine house who is in charge of the winding engine and takes his instructions from the banksman.

FIREDAMP Methane gas that comes naturally from the coal and is inflammable but when mixed with air becomes explosive.

FIREMAN  An official who is in charge of a district in the mine.

been drawn and the roof allowed to fall in. HEADING  A tunnel driven into the coal.

HEADGEAR The main frame that stood over the shaft on which are fixed the pulleys and guides for the cage.

HAULAGE  The system by which the coal is transported from the coal face to the bottom of the shaft. See Endless Rope Haulage.

JIG      A pulley wheel in the haulage system, usually at top of an incline.

JIGGER   The person, usually a lad, who operated the jig. KNOCKING A system of signalling used to control the cage and the haulage system.

KNOCKING A system of signalling used to control the cage and the haulage system.

LEVEL    A horizontal road in the mine. LASHER ON  See hooker-on.

LOWER SIDE The downward-sloping side of the workplace.

METALMAN   A man employed to service the tunnels and rails in the haulage system.

MINE       The name given in Lancashire to a coal seam. PACK       A column of stones built to support the roof.

PIT        The shaft from the surface down to the workings. PIT EYE    The area around the bottom of the shaft.

PLACE      The work place at the coal face where the collier won the coal. Each collier had his own place.

PONY DRIVER A boy who had charge of a pony which pulled the tubs along the haulage roads.

RETURNING  A tunnel through which air passes from the

GALLERY.   workings to the upcast shaft.

RIB CUTTING A tunnel cut through the coal, usually at right angles to a road.

SINKER.    A skilled man who contracted to sink new shafts. SPLIT.     A branch in the ventilation system.

STEAM JETS Nozzles at the bottom of the upcast shaft through which steam was passed to cause convection currents for the ventilation. They were considered safe since there were no naked flames to ignite inflammable gas.

STOPPINGS  Walls built across the roads and tunnels that would seal off an area of the mine.

TAKER-OFF  Someone, usually a boy, who unhitched tubs from

TENTER     Someone who looked after something e.g. furnace tenter, door tenter and pony tenter.

TOP DECK   The upper floor of the cage.

TIMBER     The wooden beams and props used to support the roof. See Props and Drawing Props.

UNDERLOOKER An official in charge of a mine and responsible to the undermanager and supervising the fireman.

UPBROW     A road driven uphill to the seam.

UPCAST     The ventilation shaft that carries the foul air away from the workings.

VENTILATION DOOR A wooden door that directs the flow of fresh air around the workings of the mine.