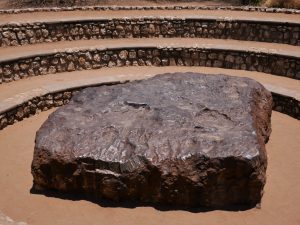 Following this week’s news of NASA’s New Horizons probe reaching Ultima Thule, this week’s photograph is of the largest meteorite ever recorded to have fallen to earth.

Our Jeremy Hucker visited the Hoba Meteorite in northern Namibia last year.  It is some 3m in length and around 1m thick and weighs over 50 tonnes, and is unusual in that it is flat on the two major sides.  It was discovered by a local farmer ploughing his field in 1920, and comprises 82% iron and 16% nickel.  It is estimated to have fallen to earth some 80,000 years ago, during what is known as the Pleistocene era – at this time much of Great Britain was covered by ice sheets (commonly known as the Ice Age, and resulting in the Diamicton soils which cover much of the country) whilst, in Africa, the first anatomically modern humans were beginning to evolve and spread across the world.

Over the years, visitors have chipped away at the meteorite for souvenirs, reducing its size, but it is now protected as a Namibian National Monument.    They take customer satisfaction very seriously, with a sign at the meteorite indicating that the ‘Complaints Department’ is some 300 miles away!