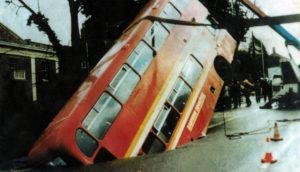 Terrifying Portals to Hell, Swallowed Cars, Serious Impacts on House Prices and Ticking Time Bombs… These are just some of the terms recently in the press linked to solution features, or ‘sinkholes’; the catch-all term for any unexpected hole in the land surface at the moment.

Last week there was news that a car had fallen into a ‘sinkhole’ outside a church in a residential street in Charlton, South East London which prompted a ‘PORTAL TO HELL’ headline from The Express, amongst other similar headlines from other sources.

Although visually striking, ‘sinkholes’ are not a new phenomenon, contrary to some media. The BGS Report on the Lambeth Group (OR/13/006) describes how the Chalk dissolves to create pipes and swallow holes several metres deep; significant dissolution occurs at the margin of overlying impermeable deposits, where surface drainage is concentrated, particularly close to the edge of the outcrops and due to acidic run-off from overlying younger strata (Paleogene) and where human activity occurs such as mining and poor infrastructure planning/maintenance (see also Geoscientist, May 2016).

A true sinkhole is defined by a naturally occurring, closed, depression in the ground (British Geological Survey (BGS), 2015).

A BGS review of a spate of publicised incidences in the South East during February 2014 grouped causes during that period of exceptional rainfall into:

To put the risk from ‘sinkholes’ into perspective, how many people have been hurt or injured in the UK in recent times (notwithstanding financial loss)? There were two notable cases in the USA in 2013 (one death), however there are none publicised from the UK. For a geological perspective, Altamura Man is believed to have expired as the result of falling in a solution feature (or well), in southern Italy approximately 150,000 years ago. The sensational perception does not match reality.

Considering an average incidence rate of two per month (BGS, recorded incidences only), what is the potential for injury from solution features? For those that work in the construction industry, how does this compare? There were 35 workers fatally injured in construction (including civil engineering) in 2014/2015, yet it would be difficult to recall such dedicated press attention. Looking at another geohazard such as radon (colourless/odourless radioactive gas), the hype is certainly more muted than ‘sinkholes’, yet for most people, radon is the single largest source of lifetime radiation exposure at home or work (increased risk of lung cancer).

The fear factor weighs heavily; The past always appears more certain than it was, and that makes the future feel more uncertain, and therefore frightening than ever (Risk, Gardner, 2008). Comparing construction statistics to those linked to geohazards does not account for voluntary versus involuntary risk, but illustrates that people tend to be more concerned about those risks over which they have little personal control (HM Treasury, 2005).

A lesson stated by the BGS from the 2014 spate of events is that the increasing storminess and reduced predictability of weather patterns has the potential to impact the occurrence these collapse subsidence, or solution, features. News in the modern age will undoubtedly prioritise the spectacular over the mundane and will likely continue to propagate a fear of ‘sinkholes’ in the UK; ‘sinkholes’ evoke the same human fears as earthquakes and volcanoes – the opposite of solid ground.

So, what can be done to reduce the impact of these natural and man-made ‘sinkholes’? It’s unlikely that government or private sector funding is going to fund a large scale response; the BGS acknowledge that there is a need for research into links between sinkholes and meteorological conditions, especially considering possible future changes to our climate. Financial losses from solution features are often addressed by appropriate insurances or duty of care in law and this may become more of a driver in future – this is certainly the case for a fewrecent landslip projects we’ve been working on (for another post!).

Minimising the impact of the above means:

You are less likely to suffer loss or damage if appropriate geohazard management is part of an approach to initial development and maintenance.