ESP’s Amanda Good recently enjoyed a visit to Dorset’s spectacular Jurassic Coast. Along the coastal path from Abbotsbury to Portland lies Chesil Beach, an incredible part of the UNESCO’s World Heritage site inscribed in 2001 for the outstanding universal value of its rocks, fossils and landforms.

This storm beach reached its present form around 5,000 years ago. Waves, driven by prevailing south-westerly winds, pushed sand and gravel eastwards along the coast in longshore drift. The effects of this process can be seen at other points along the  Jurassic Coast, which spans 95 miles along the East Devon and Dorset coastline. 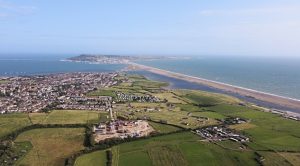 Ariel view from Littlesea over Chesil Beach, with Portland at the furthest point.

At the end of the last Ice Age, about 15-20,000 years ago, the sea levels began to rise, eroding large quantities of gravel and sand from the cliffs of what is now Lyme Bay. This was driven eastwards by the prevailing wind and waves, forming Chesil Beach and the shingle that is found there today.

The Fleet Lagoon towards Abbotsbury

Storms played an important role in the formation of Chesil Beach; the forceful waves having the power to transport large quantities of shingle. Interestingly large pebbles make up Portland and Chesil Beach, with further along the coastline at West Bay being formed of much finer shingle. The saline Fleet Lagoon located behind Chesil Beach is fed by streams but some seawater seeps in from the beach. It is home to many endangered species and thousands of migratory birds spend their winters here.

Find out more about this incredible coastline on The Jurassic Coast Trust website here.