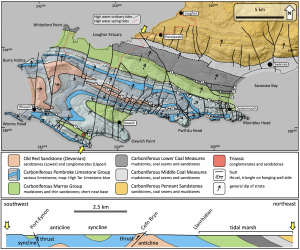 A new book on the hydrogeology of Gower has been published by Professor Peter Kokelaar. Our Danilo Bettosi and Matthew Eynon provided some assistance in the form of unpublished borehole data on the depth of the Coal Measures bedrock beneath the Loughor Estuary between Crofty Point and the upper part of of the estuary in Pontarddulais.

“The author grew up on Gower, exploring, rock climbing and caving whenever possible. School provided the fascinating notion that local water-supply springs were partly fed from limestone hills far to the north, under the South Wales Coalfield. Free ranging on Gower ended when leaving school without A-levels but with a strong desire to work outside. In 2016, retiring as George Herdman Professor of Geology at the University of Liverpool, he returned to Gower and continued exploring, at last able to investigate sources of the springs and the development of the spectacular coastal scenery and caves. Discoveries include:

Orders for the book can be placed directly with Professor Kokelaar here: https://kokelaargower.com/purchase/