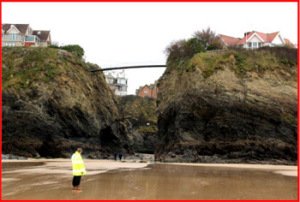 We have recently been undertaking rock stability assessments and advising on foundation renovation works at one of the most iconic coastal properties in the whole country. 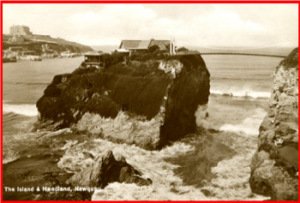 Located on The Island, Newquay, Cornwall, the property is completely surrounded by water at high tide and is approached by an Edwardian Suspension Bridge which was designed and constructed by Louis Harper in the early 20th Century (~1902). In addition to the ESP engineering geologists, The Island has had many other distinguished visitors including; Sir Arthur Conan Doyle, author of Sherlock Holmes, Sir Oliver Joseph Lodge, the famous physicist and his son Alexander Lodge, the man who invented the spark plug. 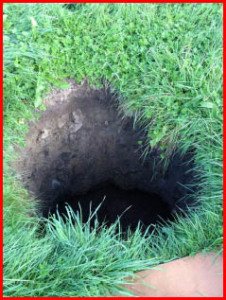 Last year our newsletter held a special feature on some of the Karst Features we have assessed, assisted with for general development hazard awareness and the implementation of physical solutions.

Following the emergence of a feature in the village green at Pentyrch at the end of 2012, ESP were appointed by Cardiff City Council to investigate, assess and remediate the zone of concern.

The works required investigation and interpretation of the regional and local karst system. Options for treatment such as an inverse rock filter were considered and eventually staged pressure grouting to stabilise the affected area with an engineered surface reinstatement was implemented. Active management of the karst zone is being promoted to minimise hazard impacts in the future. 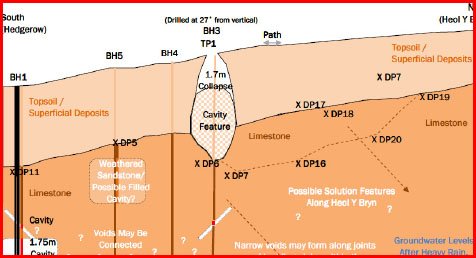 ESP has recently undertaken an extensive investigation for a prominent mixed-use development on the lower slopes of The Blorenge mountain, near Abergavenny.

As with most developments in this area the influence of the ecology was an aspect to consider; discussion with the ecologist and agreed methods of working allowed timely progress of the fieldworks late the summer and autumn of 2012.

The studies required a broad ground investigation with substantial insitu and laboratory testing, with detailed interpretation of the ground model to assist in foundation zoning and stability assessments for the proposed topographical changes.

A high proportion of larger cobbles and boulders were encountered within the glacial materials and the influence of this on the earthworks stages has been considered.

As three years have passed since our initial accreditation, at the end of 2012 we successfully passed the required external audit for ISO 9001, 18001 and 14001. This is great news and ESP has seen some real improvements driven by investment in these accreditations. For further information on us, our project experience and current activities please continue browsing our site.

ESP’s regular contribution to CPD and the next generation of geo-professionals continued with John Campbell fulfilling the role once again as a professional scrutineer for the Geological Society of London at the Cardiff events. John is also currently working on a number of expert witness/advice cases and look out for some interesting topics in the next newsletter.

ESP continued support to the Southerndown Wayfarers assisted them to topping the 2012 league! A good repeat performance is hotly anticipated for the forthcoming season.

In lieu of Christmas Cards for 2012, ESP made a donation to the Wales Council for the Blind. The WCB are a fantastic organisation who provide support to those affected by visual impairment. We have also been supporting the children’s charity Ty Hafan this year, and won a signed picture from Tiger Woods in one of the prized events.

We are continuing to support Rhys Knapman, a leading welsh sprinter at 100m and 200m, both indoors and outdoors. Rhys is working this year with Christian Malcolm with the aim of representing Wales at the 2014 Commonwealth Games. Good luck to Rhys for 2013!